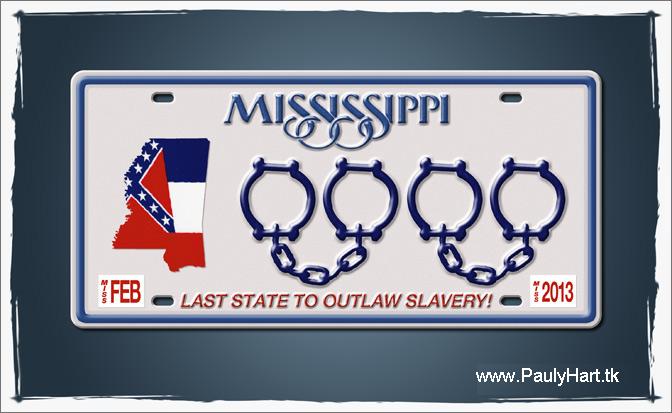 Here are some stories of how it happened

The landmark event happened earlier this month when Mississippi became the final state to officially ratify the amendment, which ended slavery.

The remarkable oversight was found because Dr. Ranjan Batra, an associate professor of neurobiology and anatomical sciences at the University of Mississippi Medical Center, saw Steven Spielberg's "Lincoln" and was inspired by the film's message.

Batra returned home and started researching when each individual state ratified the 13th Amendment and was shocked to learn that Mississippi was the only state that had failed to do so.

Batra shared the horrifying discovery with his friend Ken Sullivan, who then went and saw "Lincoln" for himself.

"People stood up and applauded at the end of it. That's the first time I ever saw an audience do that," Batra told the Clarion-Ledger. "I felt very connected to history."

The strange part for Sullivan was that he remembered when the state ratified the amendment in 1995, when he was a senior in high school.

Apparently, state Senator Hillman Frazier introduced a resolution to ratify the amendment in 1995, which unanimously passed both the Mississippi Senate and House, only for the resolution to never become official because then-Secretary of State Dick Molpus never sent a copy of the resolution to the Office of the Federal Register.

The state's mistake was finally corrected on January 30th when the office of current Secretary of State Delbert Hosemann filed the official paperwork.

On February 7th the director of the Federal Register, Charles A. Barth, wrote back, "With this action, the State of Mississippi has ratified the 13th Amendment to the Constitution of the United States.”

“We’re very deliberate in our state. We finally got it right.” Frazier said at the news.


It only took 148 years, but the state of Mississippi has officially joined post-slavery America by submitting its papers to ratify the 13th Amendment abolishing slavery to the U.S. Archivist.

The state was the last to ratify the amendment, voting unanimously in 1995 to pass the fabled document abolishing slavery in the United States. But a clerical error resulted in the papers never being submitted to the Office of the Federal Register.

“Mississippi ratified the amendment in 1995, but because the state never officially notified the US Archivist, the ratification is not official,” one particularly concerned citizen had discovered while researching the amendment.

The citizen passed along that information to a friend, Ken Sullivan, who became interested in finally making his state’s ratification official after seeing Lincoln in theaters. The rest of the story, as told by the Clarion-Ledger:

He knew he would do what he could to ensure his native state officially ratified the amendment. “I felt very connected to the history,” he said.

He tracked down a copy of the 1995 Senate resolution, introduced by state Sen. Hillman Frazier, D-Jackson, who had been upset to learn Mississippi was the only state that had never ratified the 13th Amendment.

The resolution passed both the Mississippi Senate and House.

“It was unanimous,” Frazier recalled. “Some didn’t vote, but we didn’t receive a ‘nay’ vote.”

The last paragraph of the resolution called on the secretary of state to send a copy to the Office of the Federal Register.

Why the copy was never sent in 1995 remains unknown.

“What an amendment to have an error in filing,” said Dick Molpus, who served then as secretary of state. “Thanks to Ken Sullivan for being a good citizen in bringing this oversight to light, so it can be corrected.”

That “Lincoln” played a role pleases him, he said. “It was one of the most inspirational movies I’ve ever seen.”

After seeing the film, Sullivan contacted the office of Secretary of State Delbert Hosemann, who agreed to file the paperwork and make it official.

On Jan. 30, Hosemann sent the Office of the Federal Register a copy of the 1995 Senate resolution, adopted by both the Mississippi Senate and House.

On Feb. 7, Charles A. Barth, director of the Federal Register, wrote back that he had received the resolution: “With this action, the State of Mississippi has ratified the 13th Amendment to the Constitution of the United States.”

Becoming the final state to ratify the amendment, Mississippi closes a near century-and-a-half-long chapter of American history. Following the amendment’s passing in December of 1864, the states that rejected it began to officially ratify: New Jersey in 1866; Delaware in 1901; Kentucky in 1976; and now Mississippi.

The State of Mississippi officially ratified the 13th Amendment, which outlawed slavery … nearly 150 years after most of the states in the union did.

The gross delay, fixed earlier this month, was the result of a clerical error that left unrecorded what many state officials thought was its official ratification nearly 20 years ago.

The Mississippi Legislature had actually formally ratified the historic amendment in 1995, which even then was more than a century late, but because the ratification document was never presented to the U.S. archivist, it was never considered official.

According to The Clarion-Ledger, the bizarre error was discovered by a pair of patriotic Mississippians, who, after seeing the movie "Lincoln," looked up historical accounts of Mississippi's action and brought to the attention of state officials that they had never, in fact, ratified one of the most important documents in modern history.

The 13th Amendment, which outlawed all slavery and involuntary servitude except as punishment for a crime, was passed by the U.S. Senate on April 8, 1864, and by the House of Representatives on Jan. 31, 1865.

Throughout 1865, 26 states ratified the critical law, and in December of that year, the amendment was formally adopted into U.S. law after Georgia’s approval brought the number the required 27.

Several states, including Kentucky and Delaware, waited decades to ratify the amendment, the last being Mississippi in 1995 -- or so the state thought.

The convoluted tale resumed last fall, when Dr. Ranjan Batra, a neurobiology professor at the University of Mississippi Medical Center, saw the movie “Lincoln,” which focuses on the passage of the 13th Amendment.

File this under "I thought they did that already."

Due to a procedural glitch the last time around, the Mississippi government this month formally ratified the 13th Amendment abolishing slavery.

But, like several other states whose delegations opposed the measure at the time -- New Jersey and Kentucky included -- Mississippi subsequently voted to ratify the amendment. That vote happened in 1995.

But, as reported in The Clarion-Ledger, a key step was never taken and the ratification was not made official.

The newspaper reported how Dr. Ranjan Batra, an associate professor at the University of Mississippi Medical Center, looked into the issue after watching the Steven Spielberg movie "Lincoln." He, along with another UMC colleague, discovered that the state did not officially notify the U.S. archivist in 1995 as required.

Batra's colleague, according to the newspaper, then called the Mississippi secretary of state, who at last sent the needed paperwork to the National Archives.

According to The Clarion-Ledger, the Federal Register wrote back on Feb. 7 to confirm that "with this action, the State of Mississippi has ratified the 13th Amendment to the Constitution of the United States."