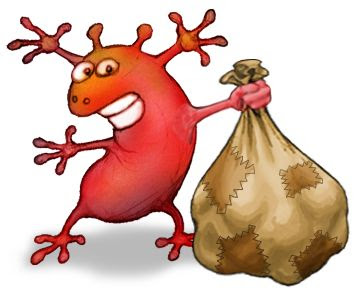 Take all the things that you like about Facebook and then take all the things that you like about Real Time Strategy and put them in a blender with a dash of Willy Wonka and a pinch of Spore and you have the newest game from the masterminds behind CasualCollective.com within reach. Imagine your Tower Defense dreams have all come true. Now imagine that Evony imploded under the massive weight of all that tragic advertisement. Like every game that comes out of the minds of "Critters" and "Grr", this game is a winner.

Combining the resource gathering concepts of most RTS games and placing them within a forefront social website such as Facebook.com, the inventors have been very successful in their efforts to not only entertain, but challenge the user to come up with creative problem solving in world being invaded by colorful creeps. To the best of my knowledge this could be bigger than the Desktop Defender game for Facebook, which was developed by the same two genius's. 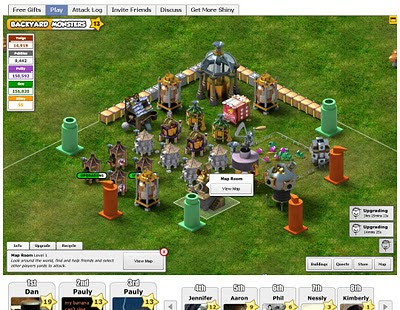 To date, Desktop Defender has been viewed as extremely successful for all people who view Tower Defense games as the pinnacle in gaming. To take it a step further than their game on CasualCollective.com (Desktop Tower Defense), they utilized a score system to keep track of your friends and to even interfere with their own gaming using ninjas that could be "purchased" by "points" that would be sent into their game to interrupt their score. Now take this idea even one step further.

Backyard Monsters will become the biggest thing on Facebook since Farmville. 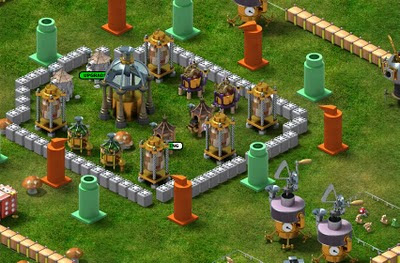 I imagine that the best way to explain this game would be to take the concepts of an RTS and just imagine it being played over a course of months instead of hours. If you have ever seen anything like "Ikarium" then you know what i am talking about. "Backyard Monsters" uses some of these same concepts but is more along the lines of "Age of Empires" by Microsoft than "Starland TD" by Marsh when it comes to battling your opponent.

Overall, even though the game is not to the 1.0 yet, still in psedo-beta stage, I give it a 5 of 5 for overall performance. So much going on! I can't wait to see what happens when I get to level up my Town Hall. My friend Dan Fox is a level 18, and I am still a lowly level 13 so I need to figure out how to increase my overall effectiveness here. 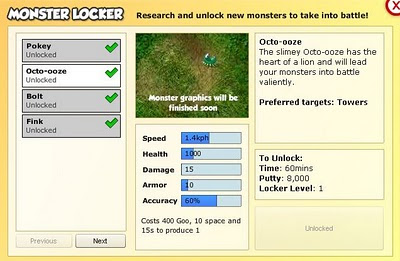 Let's see: I have one free little blue guy so I need to get him over to the putty harvester thinngy so I can get the next little monster unlocked, then I can upgrade my splash towers so my stuff doesn't get stolen.... Oh. Speaking of that, I need to harvest my pebbles. See you.

If you haven't played Backyard Monsters, you should! Just remember that they're still working the "bugs" out. Visit it here: http://apps.facebook.com/backyardmonsters/