The Federal Reserve has painted itself into a very narrow and troubling corner for most of working and middle class America. The massive debt problems on hand have no realistic way of being paid off and the best path in the eyes of the Federal Reserve is to slowly inflate away the currency and debt. Yet that brings up some troubling dilemmas. Think of the cost of living adjustments (COLAs) that many on Social Security once received. Many of these people purchased homes pre-bubble days and many may have their home paid off. Yet because a large portion of the CPI is based on housing, the CPI has been falling for the last few years stunting growth in COLAs all the while food and other daily use items are surging in cost. The Federal Reserve has no allegiance to any country and is only concerned with the safety of the biggest banks. That is their main charter even though they claim to talk about a stable currency for a country. Let us see how well they are holding to that mission:

Does the above look like the Federal Reserve has done a good job in maintaining a stable currency? Of course this is strategically planned and is deliberate. The purpose of debasing the currency is to make our exports more competitive abroad but remember who you are competing with here. We are going against places like China who artificially hold their currency low to expand their economy. Is this really the kind of global policy we are looking for here? Of course the Federal Reserve is allowing global banks to reap enormous profits all on the back of middle class Americans that allow the legal structure to stay in place and have stolen large amounts of money through bailouts. The banking industry is merely hoarding money and using most of it in stock market speculation: 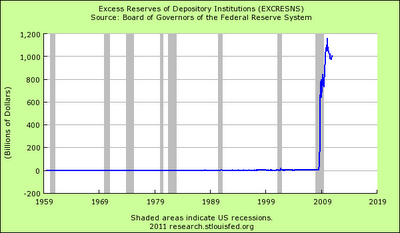 Think about excess reserves and why they are so high currently. Banks knowing the full magnitude of their bad debts are holding on tightly to the money earning guaranteed low rates instead of putting the money to work into the economy. In other words they don’t believe the US economy recovery hype. Ask any small business owner how easy it is to borrow money from a big bank in the current economy. The money is extremely tight. But larger corporations are able to leverage their money globally and are largely outsourcing their workforce. It is a troubling dynamic. These large banks that are only permitted to survive because of US taxpayers are actually using the money to outsource the jobs that saved them from default. The Federal Reserve is merely lubricating the wheels of the full-fledged global debasement of our currency. First the currency is debased followed by the workforce.