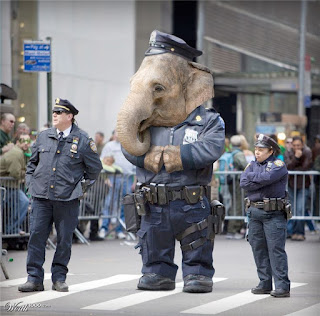 All of a sudden, a policeman comes along and tells the elephant to take a hike, and so, the elephant moves along. But the policeman has a job to do now the elephant has made a mess of things, so he begins to direct traffic to get everything under control.

In the King James Version, Matthew 28:18 teaches that Christ Jesus is bully, with no authority, messing about, doing what he wants.

In the actual Bible, Matthew 28:18 tells us that Jesus is the policeman, cleaning up everything and putting it back the way things were supposed to be.

Here are some examples:

English Standard Version
And Jesus came and said to them, “All authority in heaven and on earth has been given to me.

Berean Literal Bible
And having come to them, Jesus spoke to them, saying, "All authority in heaven and on the earth has been given to Me.

New American Standard Bible
And Jesus came up and spoke to them, saying, "All authority has been given to Me in heaven and on earth.

Young's Literal Translation
And having come near, Jesus spake to them, saying, 'Given to me was all authority in heaven and on earth;

Here's some more that Richard Nickels put together.

Genesis 1:2 should read "And the earth became without form . . . ." The word translated "was" is hayah, and denotes a condition different than a former condition, as in Genesis 19:26.

Genesis 10:9 should read " . . . Nimrod the mighty hunter in place of [in opposition to] the LORD." The word "before" is incorrect and gives the connotation that Nimrod was a good guy, which is false.

Leviticus 16:8, 10, 26 in the KJV is "scapegoat" which today has the connotation of someone who is unjustly blamed for other's sins. The Hebrew is Azazel, which means "one removed or separated." The Azazel goal represents Satan, who is no scapegoat. He is guilty of his part in our sins.

Deuteronomy 24:1, "then let him" should be "and he." As the Savior explained in Matthew 19, Moses did not command divorcement. This statute is regulating the permission of divorce because of the hardness of their hearts.

Ezekiel 20:25 should read "Wherefore I permitted them, or gave them over to, [false] statutes that are not good, and judgments whereby they should not live." God's laws are good, perfect and right. This verse shows that since Israel rejected God's laws, He allowed them to hurt themselves by following false man made customs and laws.

Daniel 8:14 is correct in the margin, which substitutes "evening morning" for "days." Too bad William Miller didn't realize this.

Malachi 4:6 should read " . . . lest I come and smite the earth with utter destruction." "Curse" doesn't give the proper sense here. Same word used in Zechariah 14:11.

Matthew 24:22 needs an additional word to clarify the meaning. It should say "there should no flesh be saved alive."

Matthew 27:49 omits text which was in the original. Moffatt correctly adds it, while the RSV puts it in a footnote: "And another took a spear and pierced His side, and out came water and blood." The Savior's death came when a soldier pierced His side, Revelation 1:7.

Luke 2:14 should say, "Glory to God in the highest, and on earth peace among men of God's good pleasure or choosing." That is, there will be peace on earth among men who have God's good will in their hearts.

Luke 14:26 has the unfortunate translation of the Greek word miseo, Strong's #3404, as "hate", when it should be rendered "love less by comparison." We are not to hate our parents and family!

John 1:31, 33 should say "baptize" or "baptizing IN water" not with water. Pouring or sprinkling with water is not the scriptural method of baptism, but only thorough immersion in water.

Acts 12:4 has the inaccurate word "Easter" which should be rendered "Passover." The Greek word is pascha which is translated correctly as Passover in Matthew 26:2, etc.

I Timothy 4:8 should say, "For bodily exercise profiteth for a little time: but godliness in profitable unto all things . . . ."

Hebrews 4:8 should be "Joshua" rather than "Jesus", although these two words are Hebrew and Greek equivalents.

Hebrews 4:9 should read, "There remaineth therefore a keeping of a sabbath to the people of God."

Hebrews 9:28 is out of proper order in the King James. It should be: "So Christ was once offered to bear the sins of many; and unto them without sin that look for him shall he appear the second time unto salvation."

Revelation 20:4-5 in the KJV is a little confusing until you realize that the sentence "This is the first resurrection." in verse five refers back to "they lived and reigned with Christ a thousand years" in verse four.

Revelation 22:2 should be "health" rather than "healing."

We have shown how in Revelation 20:10 that the italicized "are" is incorrect and that "were cast" in italics would have been more appropriate.

John 8:28 where Jesus said "I am he." The "he" is in italics and was not actually spoken by Jesus, completely obscuring the fact the Jesus was claiming to be the great "I AM" of the Old Testament, John 8:58 and Exodus 3:14.

Matthew 24:24 should not have the italicized words "it were".

Romans 1:7 incorrectly has the italicized words "to be." The fact is, Christians are now saints.

Colossians 2:16-17 can be properly understood only if the KJV italicized word "is" in verse 17 is left out, as it should be. The message of these verses is: don't let men judge you as doing wrong when you observe the holy days, new moons and sabbaths; let the body of Christ (the Church) do the judging.

I Timothy 3:11 has "their" in italics, which is not implied in the original.

II Peter 2:5 should not have "person, a." Noah was the eighth preacher of righteousness.
...And several more that you can find on your own time.