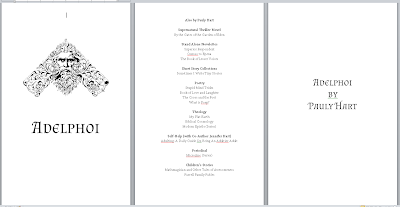 Here is a tease of pages 1-3 of my new compilation or anthology... Or, whatever you call a tome with several stories inside of it.

This is a screenshot of my MSWord document that is receiving attention currently. Mark Fruci, my editor, is still slogging though the end of the book, so I figured I might as well work on the guts, so as not to waste time.

I'm super excited y'all. I really am happy with most everything that's happened during this entire project. From the cover creation to the hiring of a super-genius editor, to all the support I have received from family and friends... This has been a really fun book.

It's also been stress-relief. So often, during the course of my week, I get to a place of frustration with everything. Lately, my boss took a mission trip to Africa and left me in charge of the work. I had six subcontractors that I was in communication with, and the boss... Well... He fired me after the first week. I thought things were fine, but halfway through his fortnight adventure, he texts me telling me to not work on anything until he gets back. 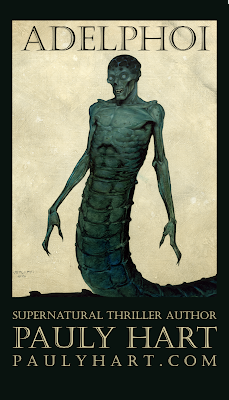 It was all very abrupt and hurtful. But all is well in the end. I was able to buckle down and work on this and other projects to relieve my mind. So, while having an unexpected week off of work was extremely hurtful, it did allow me to focus on the book, for which I'm grateful for the opportunity.

As you may already know, the cover art was painted by Brom, and I got the rights to use it for a steal. I'm super excited to put it in the marketplace, and I hope to gain more expertise when it comes to picking cover art for my books. The mockup shown here is actually the banner I had printed. The novel cover will obviously be similar, for Brom's art is the only art for the exterior of the book.

So far, the reading list includes: 16 Shorts, 5 Poems, 1 Canto, and 3 Novelettes. I am super excited about the Canto (which is basically a really long poem) because it is one of my original books that I published as a chapbook back in 1996. I am pleased that: "Indigo Dark Burn" is finally coming into professional publication. It's been too long.

As far as the other poems are concerned, this will be a first. Writing poetry is tough, but writing horror poetry? Come on. Edgar Allan Poe I am not, but I do think I gave them a professionalism that few would argue is sophomoric. The Novelettes I am somewhat concerned with. I have three listed, but I might just nix one and leave it at two. I am still torn about that. But here we go, let's talk "short stories" because that's really the meat of the whole book.

Of the 16 Shorts listed, the majority of them are not new to the printed page. But they are the best one's I've written. I've featured some of them in my magazine: "Microzine" but the readership on that Periodical is not blowing up the machines at the Amazon printing press. So, I figured, by putting them in their own collection, they would have the opportunity to shine as they should, along with their peers - other horror stories.

I've pushed the publication back again. It will be ready in February. Hopefully very early in the month... Just in time for you to get your hands on it for St. Valentine's Day... If... If you're into that kind of thing, I mean.

I will see you soon.