Julia Roberts illegal in the UK. They say: "Too Pretty For Us"! 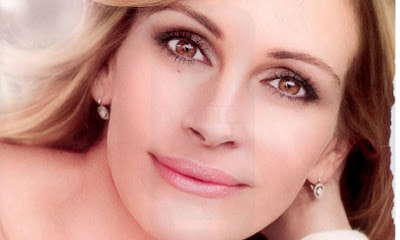 
Swinson, who has waged a long-running campaign against "overly perfected and unrealistic images" of women in adverts, lodged complaints with the Advertising Standards Authority about the magazine campaigns for L'Oréal-owned brands Lancôme and Maybelline. The ASA ruled that both ads breached the advertising standards code for exaggeration and being misleading and banned them from future publication.


L'Oréal's two-page ad featuring Roberts, who is the face of Lancôme, promoted a foundation called Teint Miracle, which it claims creates a "natural light" that emanates from beautiful skin. It was shot by renowned fashion photographer Mario Testino. The ad for Maybelline featured Turlington promoting a foundation called The Eraser, which is claimed to be an "anti-ageing" product. In the ad, parts of Turlington's face are shown covered by the foundation while other parts are not, in order to show the effects of the product.


Swinson complained that images of both celebrities had been digitally manipulated and were "not representative of the results the product could achieve".


L'Oréal UK admitted that Turlington's image had been "digitally retouched to lighten the skin, clean up makeup, reduce dark shadows and shading around the eyes, smooth the lips and darken the eyebrows". However, it claimed there were still signs of ageing, such as crow's feet, and that the image "accurately illustrated" the achieveable results.

The company, which provided the ASA with pictures of both women "on the red carpet" to show that they were naturally beautiful, admitted that digital post-production techniques had been used on Roberts but maintained that the changes were not "directly relevant" and that the ad was an "aspirational picture".


Swinson said it was "shocking" that the ASA was not allowed to see the pre-production pictures of Roberts due to contractual agreements with the actor. "It shows just how ridiculous things have become when there is such fear over an unairbrushed photo that even the advertising regulator isn't permitted to see it," she added.


In the case of both the Roberts and Turlington ads the ASA said it was not provided with enough information to evaluate what impact the digital enhancements had on the final image.


"On the basis of the evidence we had received we could not conclude that the ad image accurately illustrated what effect the product could achieve, and that the image had not been exaggerated by digital post-production techniques," the ASA said.


"Pictures of flawless skin and super-slim bodies are all around, but they don't reflect reality," said Swinson. "Excessive airbrushing and digital manipulation techniques have become the norm, but both Christy Turlington and Julia Roberts are naturally beautiful women who don't need retouching to look great. This ban sends a powerful message to advertisers – let's get back to reality."