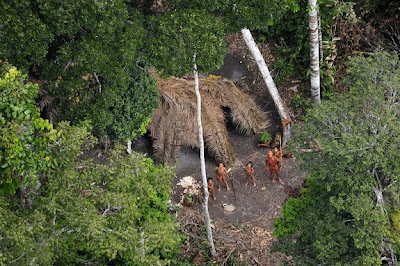 An Amazon tribe that was believed to have had no previous contact with modern civilization may have gotten its first introduction last week – courtesy of a group of drug dealers.


Brazilian officials who keep tabs on the region's so-called "uncontacted" inhabitants from afar fear that the tribe was forced to flee the area as a result of the apparent interaction, or may have even been wiped out by the suspected drug dealers.

The worries began late last week after a government-run guard post in the area was attacked by a group of armed men believed to have been smuggling drugs between Peru and Brazil, the BBC reports.

Since the attack, officials have found no sign of the tribe, which was first photographed from the air three years ago. Carlos Lisboa Travassos, the head of Brazil’s Isolated Indians Department, told local media that the guards found a broken arrowhead in one of the attacker’s backpacks that was left behind, suggesting the armed men had made contact with the tribe.

Authorities also found a package containing 44 pounds of cocaine in the area, LiveScience reports, further adding to fears that smugglers may have wanted to remove the tribe from the region in order to clear the way for illegal drug running.

The area where the tribe lives, the Javari Valley of the western Amazon, is one of the most isolated regions of the Amazon and has the highest concentration of known isolated tribes. Brazilian officials keep an eye on the tribal lands but avoid contact with the inhabitants in order to avoid exposing them to germs from which they have no immunity.

At least eight similarly isolated tribes have been spotted in the same region, making the possibility of drug trafficking in the area that much more of a worry for officials hoping to protect the indigenous way of life.

An uncontacted Amazon tribe that made headlines earlier this year after being filmed from the air is feared missing after presumed drug traffickers overran the Brazilian guards posted to protect the tribe's lands.

According to tribal advocacy group Survival International, Brazilian officials can find no trace of the Indians in the area after heavily armed men ransacked the guard post in western Brazil about 12 miles (20 kilometers) from the Peruvian border. Like other uncontacted tribes, the Indians live a traditional life in the forest and do not have contact with the outside world.

Workers from FUNAI, the government bureau of Indian affairs, found a broken arrow in one of the men's backpacks, raising fears for the tribe's safety.

"We think the Peruvians made the Indians flee," Carlos Travassos, the head of the government's isolated Indians department, said in a statement. "Now we have good proof. We are more worried than ever."

As many as 2,000 uncontacted Indians may live in the Javari Valley of the western Amazon, Survival International estimates. Brazilian officials keep an eye on tribal lands but do not force contact with the inhabitants. In February, Brazil's Indian Affairs Department released aerial photos and film of the tribe that is now missing, revealing thatched dwellings, tribe members in red body paint, and gardens full of manioc tubers and papaya. [See the aerial photos ]

Now the Indians seem to have disappeared. According to Survival International, police found a package containing 44 pounds (20 kilograms) of cocaine in the area. That could mean that the Envira River, where the Brazilian guard post is located, is now an entry point into Brazil for Peruvian cocaine smugglers, they said.

According to local reports, police have detained one man, a Portuguese national who was arrested and deported for drug trafficking in March. Jose Carlos Meirelles, who headed the remote guard post, is now back in the area and reported that several groups of men armed with sub-machine guns and rifles are in the forest near the base.

Guns aren't the only threat to uncontacted Indians. Common diseases can also kill them, because they have not built up immunity to the viruses and bacteria outside their forest home. According to Survival International's uncontactedtribes.org, there are about 100 uncontacted tribes in existence worldwide.

"This situation could be one of the biggest blows we have ever seen in the protection of uncontacted Indians in recent decades," Travassos said, referring to the possible drug traffickers. "It's a catastrophe."