As I sit here in my favorite coffee shop in Indiana I am reminiscent of a day not too long ago when I was living in Oklahoma. It was raining then, like it is today, back in march of 2008 and I was just fresh off of the oil fields. With muddy boots and a slippy disposition, I hopped on to Stumbleupon and began stumbling. Probably early in the afternoon, I ran into the 2008 SXSW conference news-feed and found out about Bitstrips.

And so a love affair began.

I didn't sleep much that week. After joining the "beta" website, I created comics non stop all day. Working in the oil field had it's advantages, and one of them was being off for a week at a time. This just so happened to be one of those weeks. I slid into a flash-based comic zen that was almost impossible for me to rise out of... until I had to put my boots back on and go to work.

In this one week I created one hundred comics, invented Bitstrips line art, invented the first drama series and blew away the creators with my zeal and passion for their product. Even the creator's mother was impressed with my love of the site. She was happy for the attention that her boy was getting, and rightfully so. She had raised a winner. Bitstrips was a lazy artists dream come true. A chance to say the things that I always wanted to say in a comic, but didn't have the ability to do... as I am unable, with my mitts (that I call hands) to do anything with realistic images.

And the funny thing of it all is that the product was accidental.

BA, DK1, Dorian, Thomas, TV and others had forged Bitstrips on a lark, an almost supplemental item... trying to find a way to easily story-board their animated series: Griddleville. G-ville was the first major project that their host company, Corematrix, had attempted. Maybe not the actual first, but the first largest. BA, the owner/chief/mage had brought together his right hand man DK1, and the rest of the Scooby gang and had driven from Toronto, Canada to Austin, Texas with a wagon full of hopes, dreams, and Tim Horton’s coffee: landing at SXSW that year hoping to be the breakout app of 2008. 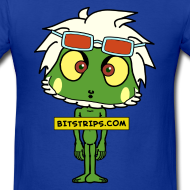 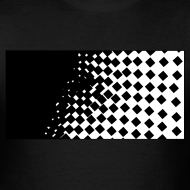 Did they succeed? In my mind: “yes”. In actuality: they had hit the jackpot on building a bridge between my mind and actualized digital art… so another “yes”.

After one week of furiously vomiting out my ideas onto the Bitstrips server in Canada, I took a break. A forced break, seeing as I had to go clock back in at the oil rig... but all I could think about was Bitstrips. I would find myself thinking in almost any funny situation: "Oh that would make a great Bitstrip." Odd that the word "Bitstrips" worked itself into my conversation so quickly, and invariably people would ask: "What's a Bitstrip?" Thus, the conversation would begin. it was awesome, fun and unique and at the time, full of artistic adults who had found it rumbling around at /b on 4chan or whatever. 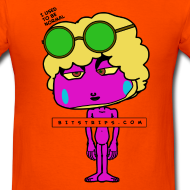 Behind our backs, the innovators of the wonderful little world that incorporated my new existence had been talking to the Canadian school system and introducing Bitstripsforschools.com into the world. With this, came a new wave of popularity and a new wave of stupidity. Whereas before, the main servers of Bitstrips had been an elite group of inventive 30 and 40-something adults creative efforts, now it was primarily comprised of a home for12 year old testosterone-fueled angst and lunacy.

Not that the people were stupid... per se... many of those bright young minds published some wonderful things. But imagine, if you will, that your favorite hole-in-the-wall coffeeshop started passing out fliers for free lattes at the middle school down the street. How quickly would you commit seppuku? Or just unplug your Wi-Fi and go home. As such: many elderly Bitstrips users did. On one of the user-spawned Bitstrips Wikis, I named this: "The Onslaught". And it was a good analogy. But, now, in retrospect, I am happy that it happened. More people means more stuff.

Today look back and realize that I am not happy how my attitude was at the time (sorry youngsters).

And yes, grumpiness ensued and I slacked off my usage from Bitstrips... As many of the old ones did. But we who recognized (eventually) its true power from amalgamation came around and thrived in the new chaos. And Bitstrips strove on... like a monkey up a hill... or, a better analogy. Hiring new staff, incorporating new ideas, revamping the character builder (twice), they finally left their almost-perpetual beta stage... And with "wings as eagles" they launched their Facebook app.

And then they launched their mobile app.

And then Huffington Post got all shitty and wrote an article on how to block it.

And as I sit here, Halloween morning, the servers are down. Across the board, the servers have succumbed to a shutdown of almost DDoS attack proportions. Shut down due to popularity. It's a  wonderful problem to have: Popularity. It's like having too much money that you have to buy a bigger wallet and a larger pair of pants to put the wallet in... And then a second dude to carry around another couple of wallets who just hangs out with you. It's actually awesome how popular Bitstrips became, literally, in leaps and bounds, seemingly overnight. I've read probably six or seven articles just this morning about how "annoying" they are and how to "block" them from your facebook feed.

Fools! If only they knew the power of the force!

Bitstrips is a powerful tool.

Not only do you have the power to create storyboard material (as it was originally intended), or to make Farside-esque comics, or even to do the old Beetle Baily tell-the-story story three panel comic. It's awesome. And, for someone who can't draw stick figures, like me, it's a time saver.

Even in my own life I have used Bitstrips on the web and it came with surprising popularity. When the Pirate Bay advertised it's homepage as available to host "The Promo Bay", I submitted a comic to them about my game: Empires and Generals, to which one of the mods replied: "This sounds awesome. And it's pretty unique in the big pile of 3000 promo requests we've gotten. So we're gonna promote you worldwide 26-28 May." Well, thank you very much for blowing me away. Hosted world wide on their front page was a big thing for me, and it was made possible by Bitstrips and the creative folks there... Plus the fact that I got 470,000 unique hits on my site was pretty cool as well.

And so the love affair continues.

I love Bitstrips and so should you.

So, if, when, the servers are back up… Hop on, sign in, and make one or two things. It’s quite catchy, and not as glitchy as when I first started. At least five of my facebook friends use it now, that didn’t use it two weeks ago. At least, if you are an artist, you should hop on board. Fiddle around, learn and innovate. Grow your creativity and make cool stuff.

You can visit Bitstrips.com HERE.

Pauly Hart wrote this without the consent of the good people at Bitstrips.com and apologizes if any information is incorrect.

Pauly Hart is a freelance writer, artist and weirdo and lives in Indiana, which explains some of it.