There are a bunch of Super De Dooper Moons this year, but today is going to have the largest of the year. Not that much of a difference, but still noticeable if you are susceptible to water weight retention... Not terrible as it will only be around 1/9 the weight of a paperclip, but still, the closer it is, the brighter it is! So that's up to one third brighter, which is amazing! It's the Hunters Moon! 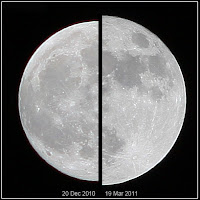 Startlingly enough, it is also going to have a rare eclipse along with it, calling it a Blood Moon. The blood moon is super rare, especially accompanied by a Super Moon! The last time this happened in 1982 I watched it and it was awesome! Since it won't happen again until 2033, you had better catch it.

Sunday's full moon has a lot going for it -- almost too much.

Not only will it be 2015's harvest moon, but it will also be a supermoon and a blood moon and coincide with a total lunar eclipse.

According to NASA it's the first time in more than 30 years a supermoon has coincided with a lunar eclipse.

That's a lot to pack in a night.

So what is the difference between a harvest moon, a blood moon and a supermoon?

Let's start with the harvest moon

*The harvest moon is an annual occurrence. It's simply the full moon closest to the fall equinox, which was on Wednesday, Sept. 23.

*The harvest moon can come both before and after the equinox.

*The harvest moon usually occurs in September but can happen as late as October.

*The harvest moon also stands out because it also occurs during the time of year with the shortest period between successive moonrises, according to EarthSky.org. What that means is basically the moon rises earlier than usual around the time of the harvest moon. Those earlier moonrises gave farmers of the past extra minutes of light to harvest their crops.

*The harvest moon is also special because it will rise in the east near sunset and appear full for several days in a row -- making it seem as if there is more than one full moon.

*A "normal" harvest moon wouldn't necessarily appear bigger and brighter than those during the rest of the year, but this one may because it's also a supermoon.

*The term "supermoon" was first coined by astrologer Richard Nolle more than 30 years ago.

*Nolle's definition: The new moon or full moon has to come within 224,834 miles of Earth, as measured from the centers of the moon and Earth, in order to be considered a supermoon.

*Many astronomers cringe at the use of the term "supermoon," preferring "perigee full moon." (Perigee means "near Earth.")

*Supermoons are not rare. In fact, this will be the fifth of six supermoons in 2015 alone. The new moons of January, February and March were supermoons as was the full moon in August. The September and October full moons will also be supermoons.

*According to EarthSky, the use of "supermoon" became widespread in 2011 when the media used it to describe the full moon of March 19, 2011, which was the closest, largest full moon that year.

*There are four to six supermoons every year on average.

A supermoon may be closer to Earth, but may not always appear larger or different in color, which leads us to -- blood moons.

A blood moon can appear reddish in color thanks to the filtering of sunlight through the Earth's atmosphere. (NASA)

What is a blood moon?

Because of this, according to NASA, almost all colors except red are "filtered" out, and the eclipsed moon appears reddish or even brown. This filtering effect is one of the origins of the term "blood moon."

*The Bible also refers to blood moons. From Joel 2:31-32 (New King James Version): "The sun will be turned to darkness and the moon to blood before the coming of the great and awesome day of the Lord. And it shall come to pass that whoever calls on the name of the Lord shall be saved."

*Some Christian pastors, namely John Hagee, have applied the term "blood moon" to the lunar tetrad that is about to end with this eclipse. Hagee wrote a book about it in 2013 called "Four Blood Moons: Something is About to Change."

*"To the best of our knowledge, however," EarthSky writes, "the use of the term blood moon to describe a lunar tetrad is of recent origin. It might have originated with John Hagee's 2013 book."

The harvest moon, blood moon, supermoon and eclipse will all be visible starting Sunday night.

Here are the times to know:


Weather won't cooperate for skywatching? Watch NASA's live stream from 7 p.m. until at least 10:30 p.m. CDT. It will be broadcast from the Marshall Space Flight Center in Huntsville.