Chocolate was DRANK first... not eaten.

Native to lowland, tropical South America, cacao has been cultivated for at least three millennia in Central America and Mexico, with its earliest documented use around 1100 BC. The majority of the Mesoamerican peoples made chocolate beverages, including the Maya and Aztecs. 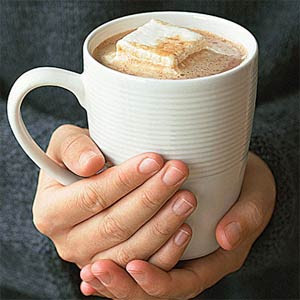 Chocolate has been used as a drink for nearly all of its history. The earliest record of using chocolate dates back before the Olmec. In November 2007, archaeologists reported finding evidence of the oldest known cultivation and use of cacao at a site in Puerto Escondido, Honduras, dating from about 1100 to 1400 BC.[6] The residues found and the kind of vessel they were found in indicate that the initial use of cacao was not simply as a beverage, but the white pulp around the cacao beans was likely used as a source of fermentable sugars for an alcoholic drink.[6] The Maya civilization grew cacao trees in their backyard,[7] and used the cacao seeds it produced to make a frothy, bitter drink.[8] Documents in Maya hieroglyphs stated that chocolate was used for ceremonial purposes, in addition to everyday life.[9] The chocolate residue found in an early ancient Maya pot in Río Azul, Guatemala, suggests that Maya were drinking chocolate around 400 AD. In the New World, chocolate was consumed in a bitter, spicy drink called xocoatl, and was often flavored with vanilla, chile pepper, and achiote (known today as annatto).[10] Xocoatl was believed to fight fatigue, a belief that is probably attributable to the theobromine content. Chocolate was also an important luxury good throughout pre-Columbian Mesoamerica, and cacao beans were often used as currency.[11] For example, the Aztecs used a system in which one turkey cost one hundred cacao beans and one fresh avocado was worth three beans.[12] South American and European cultures have used cocoa to treat diarrhea for hundreds of years.[13] All of the areas that were conquered by the Aztecs that grew cacao beans were ordered to pay them as a tax, or as the Aztecs called it, a "tribute".[14]

Until the 16th century, no European had ever heard of the popular drink from the Central and South American peoples.[15] It was not until the Spanish conquest of the Aztecs that chocolate could be imported to Europe, where it quickly became a court favorite.[15] To keep up with the high demand for this new drink, Spanish armies began enslaving Mesoamericans to produce cacao.[16] Even with cacao harvesting becoming a regular business, only royalty and the well-connected could afford to drink this expensive import.[17] Before long, the Spanish began growing cacao beans on plantations, and using an African workforce to help manage them.[18] The situation was different in England. Put simply, anyone with money could buy it.[19] The first chocolate house opened in London in 1657.[19] In 1689, noted physician and collector Hans Sloane developed a milk chocolate drink in Jamaica which was initially used by apothecaries, but later sold to the Cadbury brothers.[20]

For hundreds of years, the chocolate making process remained unchanged. When the people saw the Industrial Revolution arrive, many changes occurred that brought about the food today in its modern form. In the 1700s, mechanical mills were created that squeezed out cocoa butter, which in turn helped to create hard, durable chocolate.[21] But, it was not until the arrival of the Industrial Revolution that these mills were put to bigger use. Not long after the revolution cooled down, companies began advertising this new invention to sell many of the chocolate treats we see today.[22] When new machines were produced, people began experiencing and consuming chocolate worldwide.