March 15 (Bloomberg) -- The space shuttle Discovery blasted off tonight under a clear sky, ending a series of delays that had scrubbed previous launches.

The seven-member crew, commanded by Air Force Colonel Lee Archambault, began a 14-day mission in which the craft will deliver two solar wing arrays to the International Space Station.

The arrays will provide extra electricity needed to run the station’s expanding laboratories and sustain the vessel’s first six-person crew, who begin living there in May. 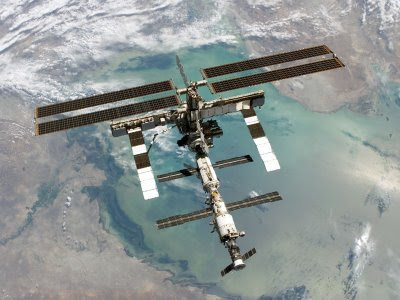 click on this link for an awesomly HUGE picture of this

NASA postponed Discovery’s flight on March 11 after technicians found a leaky valve in a line transporting gaseous hydrogen, which is flammable, away from the launch pad it could be safely burned off.

The mission already had been delay several times so engineers could test the spaceship’s three hydrogen flow-control valves. One such valve was damaged on the space shuttle Endeavour during a November flight. The two problems were unrelated.

NASA officials have said the mission is critical because the space station’s power needs are large: The vessel’s eight arrays will generate the same number of kilowatts used by 42 2,800- square-foot houses, said Allard Beutel, a NASA spokesman.

The arrays are attached to a 45-foot-long, 31,127-pound truss. When joined to the station, the truss will complete a supporting structure, the station’s “backbone,” longer than a football field, according to NASA.

Crew members will unfold the arrays in space to their full 240-foot wingspan. Each array is covered with solar cells to capture energy from the sunlight.

The arrays are attached to a 45-foot-long, 31,127-pound truss that, when joined to the station, will complete a supporting structure, the station’s “backbone,” longer than a football field, according to NASA.

The international space station, which orbits 250 miles above Earth, is being assembled by 15 countries. The station’s crew operates laboratories that study the effects of space on humans and grow protein crystals used in medical research.

Among Discovery’s seven-man crew is Koichi Wakata, who will be the first Japanese astronaut to spend an extended period of time at the station.