CAPE CANAVERAL, Fla. (AP) - Confronted with orbiting junk again, NASA ordered the astronauts aboard the linked space station and shuttle Discovery to move out of the way of a piece of debris Sunday.

Discovery's pilots fired their ship's thrusters to reorient the docked spacecraft to avoid a small piece from a 10-year-old Chinese rocket body that was due to pass uncomfortably close during Monday's planned spacewalk.

Mission Control said keeping the spacecraft in this position for about three hours - with Discovery's belly facing forward - would result in a slow, natural drag of about a foot per second, enough to get the complex out of the way of the 4-inch piece of junk.

a quick vid up on the station 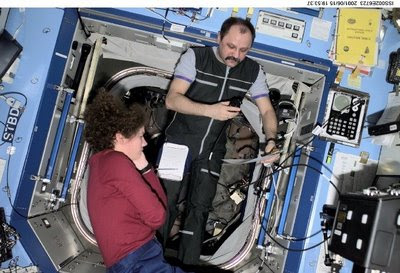 Space junk has been a recurring problem for the space station, especially recently. Earlier this month, the three space station residents had to take shelter in their emergency getaway capsule when another piece of orbital debris seemed like it might come too close.

And just last week, right before Discovery's arrival, the space station almost had to dodge yet another piece of junk. The debris - from an old busted-up Soviet satellite - stayed at a safe distance.

"As far as I know, it's coincidental that we've had just a couple in this close timeframe," shuttle commander Lee Archambault said in a series of news interviews.

The latest episode occurred as NASA scrambled to put together a spacewalking repair plan for a jammed equipment platform at the space station.

On Monday, spacewalking astronauts will return to an equipment storage shelf that jammed during Saturday's outdoor excursion. NASA officials said Saturday night that the astronauts accidentally inserted a pin upside down and got the mechanism stuck. But on Sunday, one of the spacewalkers, Steven Swanson, said it might not have been a mistake on their part but rather the way the system was built.

It was "a lot stiffer than we thought it was going to be," Swanson said. He said he didn't pull very hard on the pin. "Now ... it looks like if I had just pulled hard on it, it would have come on down."

So Monday's spacewalkers - former schoolteachers Joseph Acaba and Richard Arnold II - will use all their strength to see if the pin comes loose. If all else fails, the jammed platform will simply be tied down with sturdier tethers, he said.

A hastily assembled team of experts spent Saturday night and much of Sunday trying to figure out how best to deal with the problem. The astronauts, meanwhile, gathered up a pry bar, a couple of hammers and other tools to force the pin loose.

The storage platform - located on the long space station framework that holds all the solar wings - is meant to secure big spare parts that will be needed once NASA's shuttles stop flying. Because of all the pin trouble Saturday, the astronauts did not have time to deploy additional shelving on the opposite side of the station. That work was bumped to Monday's spacewalk.

Swanson and Acaba said they do not worry about space junk when they're floating outside.

"We have enough other risks and worries to take on as we go outside," Swanson said.

One item on Sunday afternoon's agenda - a slow day for both crews, with time off - was a full test of the urine processor that was delivered by Discovery. There were hiccups, unfortunately, that the astronauts were trying to resolve.

The urine processor is a critical part of the space station's new water-recycling system, which NASA would like to get working before the population at the orbiting outpost doubles to six at the end of May.