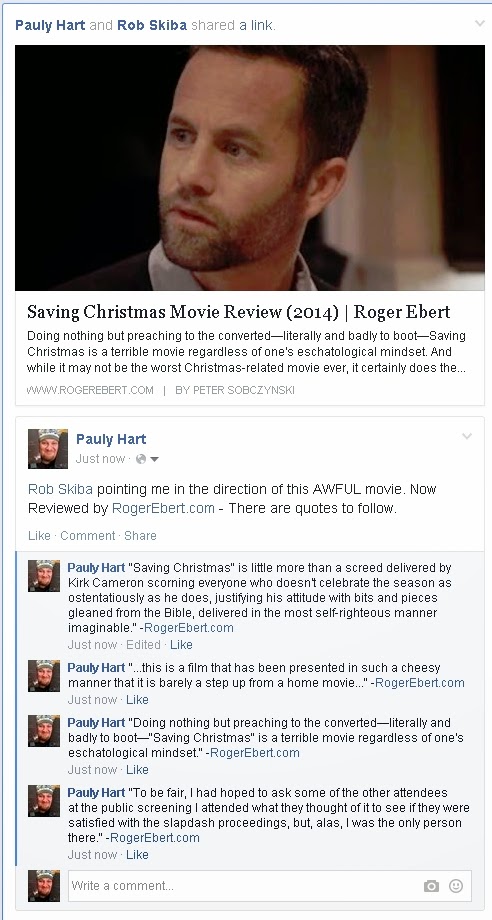 Every holiday season sees a new influx of Christmas movies desperate to become the next big seasonal perennial destined to provide laughter, tears, humanity and healthy residuals for years to come. A majority of these films tend to feature characters who despair that the true meaning of the season has been lost, replaced with people more concerned with having the tallest tree, the biggest ham, the largest party and the most gifts. "Saving Christmas" falls along these lines, but I must say that it may be the first one, at least that I can recall, where that particular character is considered to be the bad guy who wants to spoil things for everyone else.


The full title of the film is "Kirk Cameron's Saving Christmas," and, yes, the former teen idol turned conservative Christian evangelist/entertainer is front and center here playing himself. Set during a lavish Christmas party being thrown by his sister (Bridgette Ridenour), Kirk is rocked to his core when he asks about how brother-in-law Christian (Darren Doane, who also directed and co-wrote the film) is doing and Sis tells him that Christian just isn't really in the Christmas mood this year. This cannot stand, and when Kirk finally finds Christian, he is sitting out in his driveway so as not to ruin the party with his mood. He confesses to Kirk that he thinks that the true meaning of Christmas has been lost and that even the party going on in his own house is a symbol of how things have gotten so out of whack. "That money spent—how many kids could we have fed? How many wells could we have dug?"

You might think that most right-thinking people, even those who wholeheartedly embrace the season, would have little reason to argue with such sentiment, especially when delivered by someone who is taking pains to keep it to himself so as not to spoil the mood. Well, Kirk has something to say about that and it boils down to "You're all wrong—you drank the Kool-Aid." To his eyes, every gaudy symbol of the season that is putting Christian off has deep-seated religious roots, and only by venerating them in the most ostentatious manner imaginable can one be truly close to God. Take Christmas trees and Santa Claus, for example—even though such things are never mentioned in the Bible, Kirk uses cherry-picked Biblical details, a certain degree of extrapolation and no small amount of smugness ("Last I checked, God made the Winter Solstice") to prove his points with such stunning finality that Christian instantly realizes that he has been the jerk all along for "terrorizing" his family by not realizing, for example, that the giant stack of presents under the tree can suggest the skyline of the new Jerusalem.

For a good chunk of the running time, I was more flat-out baffled by "Saving Christmas" than anything else. Based on the poster and some suggestion that I heard that it would be about the so-called "war on Christmas," I was expecting the film to be a comedy about someone trying to regain the meaning of the holiday in the wake of monsters who would have everyone say "Season's Greetings" or "Happy Holidays'" instead of "Merry Christmas." This might have resulted in an awful film—though perhaps no worse than most secular Christmas-themed films you or I could mention—but at least it would have been about something, and, in the right hands, it could have actually inspired some big laughs here and there. Instead, "Saving Christmas" is little more than a screed delivered by Kirk Cameron scorning everyone who doesn't celebrate the season as ostentatiously as he does, justifying his attitude with bits and pieces gleaned from the Bible, delivered in the most self-righteous manner imaginable. The result is perhaps the only Christmas movie I can think of, especially of the religious-themed variety, that seems to flat-out endorse materialism, greed and outright gluttony. (Towards the end, Kirk admonishes one and all to "get the biggest ham...the richest butter.")

Of course, it is all well and good for someone like myself to besmirch the film with secularly-oriented sass but suppose you are someone whose views align perfectly with Cameron's—would you find "Saving Christmas" to be a rewarding cinematic experience? My guess is probably not because this is a film that has been presented in such a cheesy manner that it is barely a step up from a home movie shot during last year's festivities at Casa Cameron (and considering the number of Camerons and Doanes in the credits, that may not be that far from the truth). Essentially, what one is getting for their hard-earned ticket money is roughly an hour of two guys sitting in a car in a driveway talking, very occasionally interspersed with brief storytelling asides that boast the production values of your average junior high pageant. Then, after realizing that 60 minutes does not cut it as a feature-length film any more, Doane and Cameron stretch things out to a still-anemic 80 minutes with such filler as two prologues, an endless final cookie following the equally endless end credits and an extended dance number set to a hip-hop rendition of "Angels We Have Heard On High" that may be the single whitest thing ever seen in a movie since Jill Clayburgh sang "Maybe I'm Amazed" in "An Unmarried Woman." (To be fair, I had hoped to ask some of the other attendees at the public screening I attended what they thought of it to see if they were satisfied with the slapdash proceedings, but, alas, I was the only person there.)

Doing nothing but preaching to the converted—literally and badly to boot—"Saving Christmas" is a terrible movie regardless of one's eschatological mindset. And while it may not be the worst Christmas-related movie ever (a title I believe is still held by the vile "Christmas with the Kranks"), it certainly does the genre no favors. However, if watching shoddily filmed presentations of shoddily constructed arguments justifying a self-absorbed perspective is the kind of thing that strikes your fancy, then it may indeed be up your alley after all. Those who are not of that mindset would be better served donating the price of a ticket to a food bank or shelter, where the money could do some real good during the season. You will be glad that you did.