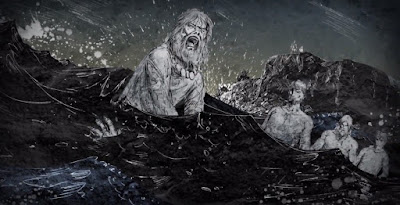 i feel like, in martin's book series: "song of ice and fire" there seems to be a lot of confusion on what god has what power. i mean, we've only seen a couple of miracles right? being brought back to life is the most common with melisandre and the white walkers...

but... we usually hear of "the seven" (the new gods) and "the old gods" which are just trees, by the way... then we heard of the lord of light! and he's been around a lot longer than any of the other ones... or has he? his real name is r'hllor but sometimes he's called the red god and is the actual god of heat and life.

the great other, who gives power to power to the white walkers is the god of ice and death. and these are the only real powers in the world with the exception of the god of death.

so there's the biggest yin-yang going on, but there's a larger pantheon. the biggest star here is: death. and many people worship him on essos.

the god of death is also called the many-faced god, the black goat and the lion of night in yi-ti and he's the only one worshiped in qohor... but oddly enough he is "the stranger" in the religion of the seven gods. he's got straight up churches, cults, cities and other places where he pops up now and again, and guess what? his other name is "the drowned god"... even among sailors who worship the merling king, he's even said to be a face of the many faced god.

so forget the trees or the great stallion or the great shepherd or even the entire religion of the seven with it's septs and sparrows... really there's only two gods in the entire world, with the many faced god wearing all sorts of disguises.

basically there's a GOOD and an EVIL.

syrio forel basically told it to us long ago. "there is only one god, and his name is death. but wait. arya said "yes" to him when she became one of his faces... basically she has become death.

this is something that i don't like, but martin planned it this way. that we would hate melisandre and love arya only to find out that melisandre serves a good guy and arya serves a bad guy.