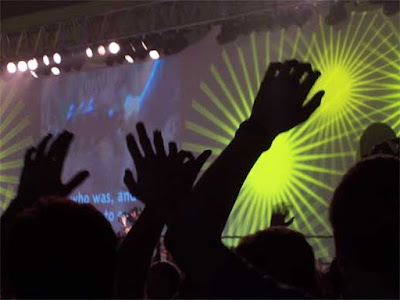 the "music ministry" of today's church in so many ways is wrong. it needs to change. we spend too much money on lights and amps and soundboards and not enough on the poor. but the physical items of the stage are not really what's on my heart, it's the songs themselves.

i think the largest paradigm shift came somewhere around my time in youth group where it was still kinda "edgy" to play modern music. we were in the trenches on the front lines of the introduction of "pop" styles like "rock and roll" (God forbid) and it was all new.

and so little by little, as i went to church and attended, and finally became a youth minister i watched this whole thing grow and blossom from petra to d.c. talk, and it was fabulous... but i noticed one thing was missing: depth.

i think i must have noticed it for the first time in 1993 when i worked amy grant's: "heart in motion" concert. here was the famous/fabulous woman who had given so much music to her Lord and now she sang love songs? it was very upsetting to more people than the differences between elvis presley's first two albums...

one thing i miss in the old world (as i guess i'm going to call it now) music is the mention of eternal promises and foundational teachings. things like the blood of the lamb, the new covenant, the gift of the Holy Spirit... a lot of these are simplified by (in order) "your love" and "your promise" and "your gifts". right. pretty vague.

but you can play it with slow dynamics and repetition and chord progressions that lift higher and higher and eventually end in a violin solo that brings all the folks to tears... that's what people want nowadays isn't it? not the meat of the word, but milk. isn't this what the apostle paul warned us of?

have we not read our bibles in so long that the things we hear from these stages in our modern buildings is actually uplifting? are we really that dumb to the actual meaning of a "worship service"? is our mind only our emotions and not our reason? is this "worship" or is it "brain washing"?