X-Men: Apocalypse - A type of Anti-Christ 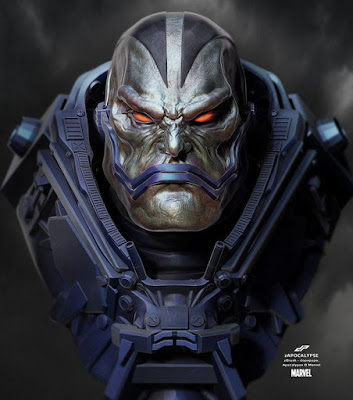 i recently watched the new xmen movie, the one with apocalypse.

when i watch such things for research purposes, i like to do it at home on a computer where i can pause, pray, fast-forward, rewind... etc... and am not at the mercy of the projectionists whim. i recently view the movie on putlocker and did find the similarities very compelling. the sad news is that this side of the marvel universe is preaching that "mutation" is inevitable and "ascension" a directive of the species to propel us towards an "evolutionary leap" which will greatly benefit mankind.

though they don't dive into too much of the backstory of apocalypse, they do hit the main points home. That he is "The One" to help mankind is a given, although he does it in a horrible way, similar to the black christ of satanism and other such antichrist movements. if it is a shadow of nimrod, it's an easy stretch. in the marvel universe, he is easily the shadow and type of satan.

strangely, marvel (the actual comic company) is one of the most transparent corporations to show the power and glory of God. in power rating lists, there is a YHWH portrayal called "one-above-all", there is a Jesus Christ portrayal called "the beyonder, and there is a Holy Spirit character called "living tribunal." the representations came at a time where marvel really was ministering to a lost and hurting audience. they have changed for the worse in the crossover mediums.

"one-above-all", with eyes as white hot embers, "beyonder", being born in human likeness after realizing his true mission only to be killed by mankind, and "living tribunal" with a multitude of hidden faces so as to judge with impunity all were created, i believe, with a divine plan. even the fourth most powerful being, "eternity" shows Gods glory in the comics... but then again, evil monsters with bible parallels sell a little better.

apocalypse is shown to be "the first mutant" which is a way of saying that for the mutants who need help and love and a leader in this "brave new world" we should look towards the true future of the race and embrace this change. in the movie he has four horsemen (sound familiar)... one of them is "angel" if you remember him, and rids the world of all of it's "false gods." it is a very prophetic telling of the prophetic rise of the "man of sin" as mentioned in the new testament.

"In the harsh, unforgiving desert of ancient Egypt, ruled by Rama-Tut, a band of nomadic raiders found an infant, gray-skinned and freakish in appearance, abandoned by the settlers of Akkaba. The nomads took the child for their own, giving him the name En Sabah Nur, 'The First One,'"

"He was also known to have traveled around the world during these ancient years, appearing to various primitive cultures as their death god. At some point, when traveling through Mongolia, Apocalypse encountered a spaceship abandoned by the planet-judging aliens, the Celestials. His travels then became fueled by a single-minded purpose-- to find the key that would unlock the secrets to this alien technology." -Marvel. com

so. watch this movie at your discretion, i would recommend it, but then again i also recommend not giving money to the parent company, walt disney, who has proven to be anti-christ.

may YHVH bless you.