Not all Cattle are Cow. 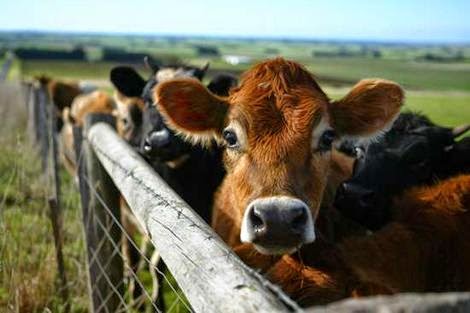 Cow: a mature female bovine that has given birth to at least one or two calves. Colloquially, the term "cow" is also in reference to the Bos primigenius species of domestic cattle, regardless of age, gender, breed or type. However for most people who work with or raise cattle, this term is not used in the same reference as previously noted.


Bull: a mature, intact (testicles present and not removed) male bovine used for breeding purposes.
Steer: a male bovine (or bull) that has been castrated before reaching sexual maturity and is primarily used for beef.


Stag: a male bovine (or bull) that has been castrated after or upon reaching sexual maturity and is primarily used for beef, but can and is also often used as a "gomer bull" for detecting cows and heifers in heat.

Heifer: a female bovine (often immature, but beyond the "calf" stage) less than 1 to 2 years of age that has never calved. Such females, if they've never calved beyond two years of age may also be called heiferettes.

Ox (plural: Oxen): a bovine that is trained for draft work (pulling carts, wagons, plows, etc.)This is a term that primarily refers to a male bovine that has been castrated after maturity. However, an ox can also be female bovine (cow or heifer) or even a bull that has been trained for the same purpose. In the Biblical times, an ox was a general term used, just like with the term "cows," to a domesticated bovine regardless of age, gender, breed, type, or draft purposes.

Calf (plural: Calves): an immature bovine (male and female) that is reliant on milk from its dam or from a bottle in order to survive and grow. A calf is known as such from birth to around 10 months of age.

Bull calf: an immature intact male bovine (since all males are born with testes) that is reliant on milk from his dam or a bottle for growth and survival.

Steer calf: an immature male bovine that has been castrated a few days to a couple months after birth, and is reliant on milk from his dam or a bottle for growth and survival.

Heifer calf: an immature female bovine that is reliant on milk from her dam or a bottle for growth and survival.

Freemartin: an infertile or sterile heifer or heifer calf. Such infertility is a result of being maternally twinned with a bull calf which placental tissues were shared in the womb. During the first trimester, reproductive organs start to form and sexual hormones begin to be produced in the fetus. When male and female fetal calves are twinned together, the testosterone produced by the male inhibits estrogen production in the female. This results in abnormal, underdeveloped or hermaphroditic reproductive organs in the female fetus. This is not so for the male. Freemartins are sometimes referred as "hermaphrodites" if they are born with reproductive organs of both genders. As a result, these type of freemartins tend to develop secondary male sexual characteristics (muscular crest over neck, wide forehead, etc.) upon reaching puberty.

Cattle: general plural term for more than one bovine

Cattlebeast/bovine/animal: a singular term for a bovine whose gender cannot be determined, particularly when viewed at a distance. Most people like to call a bovine of unknown (or "unknown") gender as a "cow," simply because it is a much more well-known and popular term to use than "bovine" or "cattlebeast." This, however, is often not the case around experienced cattlemen and cattlewomen or "ranchers" (as some like to call them) who never use the term "cow" when referring to a bovine that is anything but a cow. "Animal," "critter," "creature," or any other term, coarse or not, are most often used over the colloquial word "cow."