SAN FRANCISCO – Yasir Afifi, a 20-year-old computer salesman and community college student, took his car in for an oil change earlier this month and his mechanic spotted an odd wire hanging from the undercarriage.

The wire was attached to a strange magnetic device that puzzled Afifi and the mechanic. They freed it from the car and posted images of it online, asking for help in identifying it.

Two days later, FBI agents arrived at Afifi's Santa Clara apartment and demanded the return of their property — a global positioning system tracking device now at the center of a raging legal debate over privacy rights.

One federal judge wrote that the widespread use of the device was straight out of George Orwell's novel, "1984".

"By holding that this kind of surveillance doesn't impair an individual's reasonable expectation of privacy, the panel hands the government the power to track the movements of every one of us, every day of our lives," wrote Alex Kozinski, the chief judge of the 9th U.S. Circuit Court of Appeals, in a blistering dissent in which a three-judge panel from his court ruled that search warrants weren't necessary for GPS tracking.

But other federal and state courts have come to the opposite conclusion. 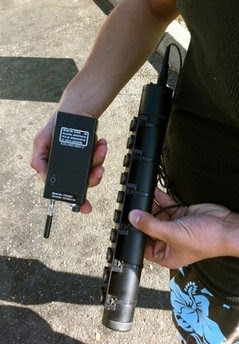 Law enforcement advocates for the devices say GPS can eliminate time-consuming stakeouts and old-fashioned "tails" with unmarked police cars. The technology had a starring role in the HBO cops-and-robbers series "The Wire" and police use it to track every type of suspect — from terrorist to thieves stealing copper from air conditioners.

That investigators don't need a warrant to use GPS tracking devices in California troubles privacy advocates, technophiles, criminal defense attorneys and others.

The federal appeals court based in Washington D.C. said in August that investigators must obtain a warrant for GPS in tossing out the conviction and life sentence of Antoine Jones, a nightclub owner convicted of operating a cocaine distribution ring. That court concluded that the accumulation of four-weeks worth of data collected from a GPS on Jones' Jeep amounted to a government "search" that required a search warrant.

Judge Douglas Ginsburg said watching Jones' Jeep for an entire month rather than trailing him on one trip made all the difference between surveilling a suspect on public property and a search needing court approval.

"First, unlike one's movements during a single journey, the whole of one's movements over the course of a month is not actually exposed to the public because the likelihood anyone will observe all those movements is effectively nil," Ginsburg wrote. The state high courts of New York, Washington and Oregon have ruled similarly.

The Obama administration last month asked the D.C. federal appeals court to change its ruling, calling the decision "vague and unworkable" and arguing that investigators will lose access to a tool they now use "with great frequency."

After the D.C. appeals court decision, the 9th Circuit refused to revisit its opposite ruling.

The panel had concluded that agents could have gathered the same information by following Juan Pineda-Moreno, who was convicted of marijuana distribution after a GPS device alerted agents he was leaving a suspected "grow site."

In his dissent, Chief Judge Kozinski noted that GPS technology is far different from tailing a suspect on a public road, which requires the active participation of investigators.

"The devices create a permanent electronic record that can be compared, contrasted and coordinated to deduce all manner of private information about individuals," Kozinksi wrote.

Legal scholars predict the U.S. Supreme Court will ultimately resolve the issue since so many courts disagree.

George Washington University law professor Orin Kerr said the issue boils down to public vs. private. As long as the GPS devices are attached to vehicles on public roads, Kerr believes the U.S. Supreme Court will decide no warrant is needed. To decide otherwise, he said, would ignore a long line of previous 4th Amendment decisions allowing for warrantless searches as long as they're conducted on public property.

"The historic line is that public surveillance is not covered by the 4th Amendment," Kerr said.

All of which makes Afifi's lawyer pessimistic that he has much of a chance to file a successful lawsuit challenging the FBI's actions. Afifi is represented by Zahra Billoo of the Council on American-Islamic Relations, the country's largest Islamic civil rights group.

Afifi declined comment after spending last week fielding myriad media inquiries after wired.com posted the story of his routine oil change and it went viral on the Internet.

She said Afifi was targeted because of his extensive ties to the Middle East, which include supporting two brothers who live in Egypt and making frequent overseas trips. His father was a well-known Islamic-American community leader who died last year in Egypt.

"Yasir hasn't done anything to warrant that kind of surveillance," Billoo said. "This was a blatant example of profiling."

#2 The United States once had the highest proportion of young adults with post-secondary degrees in the world. Today, the U.S. has fallen to 12th.

#3 In the 2009 “prosperity index” published by the Legatum Institute, the United States was ranked as just the ninth most prosperous country in the world. That was down five places from 2008.

#4 In 2001, the United States ranked fourth in the world in per capita broadband Internet use. Today it ranks 15th.

#5 The economy of India is projected to become larger than the U.S. economy by the year 2050.

#6 One prominent economist now says that the Chinese economy will be three times larger than the U.S. economy by the year 2040.

#7 According to a new study conducted by Thompson Reuters, China could become the global leader in patent filings by next year.

#8 The United States has lost approximately 42,400 factories since 2001. Approximately 75 percent of those factories employed at least 500 workers while they were still in operation.

#9 The United States has lost a staggering 32 percent of its manufacturing jobs since the year 2000.

#10 Manufacturing employment in the U.S. computer industry is actually lower in 2010 than it was in 1975.

#15 The U.S. trade deficit is running about 40 or 50 billion dollars a month in 2010. That means that by the end of the year approximately half a trillion dollars (or more) will have left the United States for good.

#18 According to a new study conducted by the Economic Policy Institute, if the U.S. trade deficit with China continues to increase at its current rate, the U.S. economy will lose over half a million jobs this year alone.

#19 American 15-year-olds do not even rank in the top half of all advanced nations when it comes to math or science literacy.

#21 The United States has the third worst poverty rate among the advanced nations tracked by the Organization for Economic Cooperation and Development.

#22 Since the Federal Reserve was created in 1913, the U.S. dollar has lost over 95 percent of its purchasing power.

#23 U.S. government spending as a percentage of GDP is now up to approximately 36 percent.

#24 The Congressional Budget Office is projecting that U.S. government public debt will hit 716 percent of GDP by the year 2080.

Identification badges for some students in both school districts now include tracking devices that allow campus administrators to keep tabs on students' whereabouts on campus. School leaders say the devices improve security and increase attendance rates.

"It's a wonderful asset," said Veronica Vijil, principal of Bailey Middle School in Spring, one of the campuses that introduced the high-tech badges this fall.

But some parents and privacy advocates question whether the technology could have unintended consequences. The tags remind them of George Orwell's Big Brother, and they worry that hackers could figure a way to track students after they leave school.

Identity theft and stalking could become serious concerns, some said. 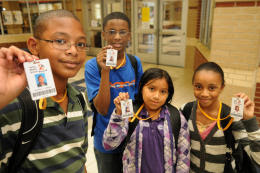 "There's real questions about the security risks involved with these gadgets," said Dotty Griffith, public education director for the ACLU of Texas. "Readers can skim information. To the best of my knowledge, these things are not foolproof. We constantly see cases where people are skimming, hacking and stealing identities from sophisticated systems."

The American Civil Liberties Union fought the use of this technology in 2005 - when a rural elementary school in California was thought to be the first in the U.S. to introduce the badges. The program was dismantled because of parental concern.

Yet, the program has been quietly growing in the Houston area.
Recovering funding

Spring has been steadily expanding the system since December 2008. Currently, about 13,500 of the district's 36,000 students have the upgraded badges, which are just slightly thicker than the average ID tag to allow for the special chip.

Chip readers placed strategically on campuses and on school buses can pick up where a student is - or at least where they left their badge. The readers cannot track students once they leave school property, said Christine Porter, Spring's associate superintendent for financial services.

The biggest benefit so far has been recovering attendance funding at middle and high schools. Every day, the district uses the tracking system to check on the whereabouts of students counted absent by classroom teachers. Oftentimes, the student is somewhere else on campus, allowing the district to recover $194,000 in state funding since December 2008.

The technology easily pays for itself within about three years at secondary schools, Porter said.

Students haven't complained much about the new badges. Most are used to being electronically monitored; their campuses have had surveillance cameras for years.

"It feels like someone's watching you at all times," said Jacorey Jackson, 11, a sixth-grader at Bailey Middle School.
Advantages and risks

Classmate Kamryn Jefferson admitted that it feels a bit awkward to know adults can track her every movement on campus, but she understands the benefits. "It makes you mindful knowing you could get caught if you do something wrong," she added.

In case of a fire, administrators would be able to see if any students are trapped inside a building. If a student disappears, they'll know exactly when they left campus.

Without fanfare, the Santa Fe school district followed Spring's lead and introduced the special ID tags at their secondary schools this fall. They've received few complaints about the mandatory badges.

"It's a very secure system," said Patti Hanssard, spokeswoman for the Santa Fe ISD. "There's no data to confirm that there's any health or safety risks."

Parent Jennifer Alvarez said she has several concerns about the technology - from whether the chips could have negative health implications to whether predators could hack into the system.

"While we can control our district and have good intent, we do not control other outside persons," she said. "The system ultimately puts students at a safety risk if bad intent is acted upon - a factor we do not control."

State officials were surprised to learn about the technology, and urged districts to offer an alternative to families with concern.

Security expert Kenneth Trump said schools also should be prepared for unintended glitches as they introduce the new technology.

"Too often we see well-intended ideas implemented and a year or two down the road, our assessments find huge disparities in what people believe is being done and what is actually happening in day-to-day practice," he said. "School security equipment gets installed and there is a lot of buzz about it, and two years down the road it is not in use, not being used properly, or out-of-service due to the lack of ongoing funds for maintenance, repair, replacement or day-to-day operating costs."

best part of "good will hunting"