I can honestly say it wasn’t the last time. It was the time before that really. I work at a third shift job. Actually... It’s the chronological first shift really, because I start after midnight. It’s an easy job and it pays well, and I’m always done by six in the morning. So Sundays is no exception. And it’s like kind of a boring morning. There’s nobody out and about and I have the whole world to myself. So on Sunday’s I would head over to the church where I was in attendance for seventeen years and police the lot. Sometimes the pastor’s truck would be there, but more often than not it wasn’t. I had done it for a month and was really neat. I would walk around, picking up litter and whatnot and pray. It was peaceful and serene.

I had gotten out of the habit of attending church because of our move out of town. My wife wasn’t a morning person and it just never seemed to happen that our schedules coincided with one another. I would be sleeping when she was up. She would be sleeping when I got home. When her weekend was just beginning, for me it was like a Monday. Truth be told, she didn’t like that church. I had been in attendance off and on for so long and had never bothered with her opinion. Anyway, after I would get off work, I began not even bothering to invite her. She wasn’t interested in “worshiping” in a building on the day after the Sabbath. So I let her sleep. But I went, I went early, I went often, and I went happily to serve. 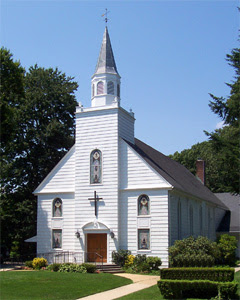 Well I got bored of doing lot policing, so I gradually began to dust spider webs with my broom (I always carry a broom with me, oddly enough). And that was more fulfilling than just picking up gum wrappers. I would hit spider webs and take out stink bugs and generally make the entrance a little more lovely for the early morning patrons. It was dirty, it needed to be done, no one else was doing it, and I was bored. And, look, even if they were doing it, they were doing it on an off day where no one would notice. As a former professional janitor, I can tell you that it only takes one night for some pretty crazy buildup to accumulate on your exterior windows.

I can trace back the beginning of the downfall to the time before the last time. I had policed, prayed, picked up, dusted, and still the outside doors were locked. I really wanted to take a good wipe to the window ledges but didn’t have any washing fluid handy. So, when the time came, the lady who unlocked the doors and I fell into a quick conversation about me just going over the ledges really quickly.  “Really quickly” was what I had thought. It was already eight and the first service started in thirty minutes. I had been patiently waiting for quite some time. I had to hurry before people started showing up. I had no desire to be seen by men. “To be seen by men” was a no-no in my book. I just wanted to get the job done, make it look pretty, and move on.

Well here she comes with a broom and a hand-towel and some windex and begins to tell me that she had to find it and get permission. “Get permission” sort of threw me for a loop, but, whatever. I got to work and twelve minutes later was finished. I gave her back the supplies and said: “Thanks.” Later that service the associate pastor told me thank you for doing that. I replied with: “Oh? I didn’t know you knew about that.” And that was all I really was aware of. Nothing more. Not until “the last time” as I began the story or, “next week” as we are here now in the telling. So, I show up, just like normal around two and a half hours early before service. The associate pastor’s car isn’t here but maybe that’s the pastor’s truck I see. Sure. No problem. He’s been here before with no problem. So I police the lot. Find some rocks that should be back over where the rocks go, put those all back. Find some litter, and pray. So I go to my back door on my car and, well... My broom is missing. That’s weird. The good news is, I still have my awesome telescoping window cleaning brush. It even has a pivoting head. I set to work on the windows. It’s actually much better than my broom! Wow! Who knew this thing would be so handy! 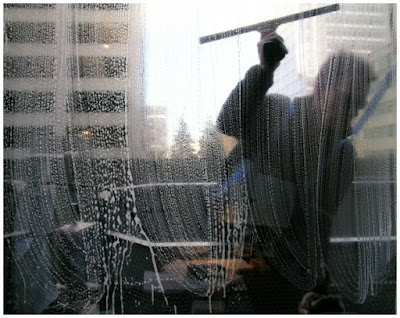 Well, there I go, off to work on these filthy window ledges, when along comes the pastor to unlock the doors. Clickity-click and they’re unlocked. He smiles at me and goes back inside. So that’s nice. I’m three quarters of the way done with the whole job and he reappears. He tells me that what I’m doing is stupid. He tells me that if I really want to help I need to come when there is proper authority to supervise me and that I should submit to his authority. I’m stunned. I tell him my goal is not to be seen by men. He responds with it’s his job to ensure the overseeing of the facility and that the building costs a lot of money and God made him the steward of it and how people can’t just come and do stuff without his permission or knowledge. So then I ask him if I can at least pray inside. He says I can go into the sanctuary and pray but to leave the windows alone.

I go back to the car and put up my weapon of destruction, (the miniature windshield broom) and sit in the car to think this over.

Well. I came to clean and pray and I won’t be deterred from doing the praying. No man can command my prayer life. But I guess, this is “his building” and if he wants dirty ledges, he can have them. The whole point of cleaning them right before service on Sunday is to have them be the most presentable when the greatest amount of people are there anyway. And wait. I wouldn’t tell him how to milk a cow, why would he tell me how to clean? Oh well. I get over my immediate knee-jerk reactions quietly, get my bible and go inside. The sanctuary is locked. He told me I could pray inside the sanctuary and now it’s locked. Whatever. Either he forgot or he didn’t unlock them on purpose because suddenly I am a nefarious thief who only wants to destroy the building.

So I pray in the foyer. And man, do I pray. I pray for him and for the building and for the people and mostly I pray that a spirit of humility and love would overtake him. Well when it’s all over around eight twenty and people are coming in and the sanctuary is finally unlocked, I go in and sit down and the service eventually gets going. The pastor is walking around and shaking people’s hands and he sees me and comes over and says: “Bless you.” Now his demeanor is really, really different. Is it repentance? Or is it the public façade? I reckon it is somewhat of a little bit of both. Maybe he heard God, maybe he heard my prayers, maybe he heard the clock and it was time to shift pastoral gears. Meh. I say: “Thanks.”

If any possession comes between you and love, then that possession has control over you. A man cannot serve two masters, he will love one and hate the other. This pastor may be really good (and he is, trust me) at holding large conferences, and at doing business deals... But he is no “good shepherd” as the Bible commands him to be. So, see you in heaven dude, God bless you and be in peace, but I desire to see in you more of the fruits of the Spirit, and less of a land-baron.

You see, in the New Testament, we have a view of the body of Christ who worships in homes and at free venues. When the body (the biblical word is “ecclesia” which means: “assembly”) came together, they met at the temple, in an area called Solomon’s Porch. It was a large walkway that surrounded the Gentile Court. It was a free venue. They met at the local synagogues, they met in the school of Tyrannus, and they met in their homes. Hey, they even met in the streets when they couldn’t find another spot.

Why is it today that we build buildings and call them “The Church” when the only real “church” is people? Why is it that we get loans from the bank to repair these buildings? Why have these buildings at all? Wouldn’t it be wiser, better, smarter, more Godly to not do this? Would following the example from the bible guarantee us a better track with our faith? What is the guarantee that having a roof over our head to call our own makes us more holy? Is there a benefit to this practice? I say no. I say that it is a left-over relic from the cult of Catholicism that has tricked us into thinking that having a building makes us more acceptable to God. When the Catholics splintered away from the Orthodox, they became to themselves, a self-righteous and pungent odor before God. In the early days of the ecclesia, they met in houses. It wasn’t until after The Great Muddying, thanks to Constantine, that we saw buildings starting to go up in the name of the new (now legal) faith. 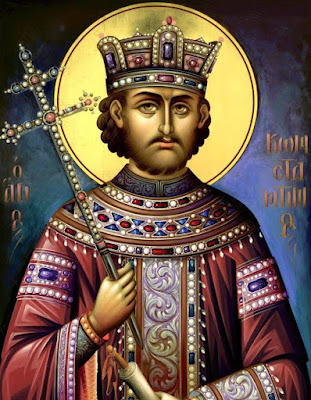 What Constantine did, to “restore the universal ecclesia of the Christians in all cities” both helped and hindered it. He gave land back, made ministers agents of the state, tied together the structure of the religious form of universal Christianity to the state of Rome, and in effect, pompously declared himself as the ruler of the religion under “The Deity.” He never really understood the power of Christ, and often referred to God as “The Divine Power.” Statues of Mars suddenly were Saint Peter. Lucky coins of Mithras were now Jesus Christ. Columbia, (or Libertas) was now “Virgin Mary.” Pantheistic study buildings became monasteries. Constantine never really relinquished his hold of his foreign gods of Helios (the sun) and Selene (the moon) and demanded that Christianity be set to worship on the first day of the week on the Sun Day... Sunday. Even after the schism of the Roman Catholic cult from the Orthodox, hundreds of years later, the Roman Catholics still worship the Sun. They build their buildings long and tall and ignore the teachings of the Bible.

So. What are the consequences of our “churches?” Do they help us or hinder us in our walk with Jesus Christ? Do they help us pray? Do they allow us to connect with God in a more meaningful way? Are they good? Are they holy? The answer is no to all of the above. Every dollar that you spend to build the steeple taller, or to revarnish the pews, or to redo the youth group basketball court is one dollar that is stolen from the true purpose of the Ecclesia. The true value and the true purpose of the body of Christ is to minister to people. To show people the good news of salvation, to preach the word and to proclaim the acceptable day of God. Not to build buildings and call people stupid.