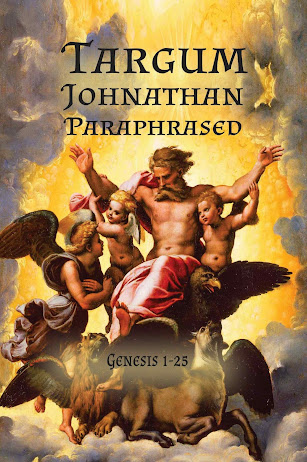 This full text, this version, this document, and any reproduction of this document and all fragments of this text has full copyright © by Pauly Hart 2021.

Please do not distribute or reproduce.

Translated from the Palestinian by Jonathan Ben Uzziel

Translated into English by J.W. Etheridge

Please find this sample copy mutatis mutandis knowing that it will remain such until altered by Pauly Hart only.

After this, Isaac and Ishmael argued.

Ishmael said, “It is right that I inherit father's things because I’m his firstborn son.”

But Isaac said, “It's right that I should inherit what is the father's, because I am the son of his wife, Sarah and you’re the son of her maid Hagar.”

Isaac responded and said, “Look, I’m 36 years old today! As blessed as He is, if the Holy One were to ask of me for all my body parts, I wouldn’t delay.”

And it was after these things these words were heard before Yahweh of the world, and The Word of Yahweh immediately tested Abraham with the tenth trial.

And Abraham said, “You see me.”

He said, “Go get the son you love… Now. Get Isaac. Go to the land of worship and offer him as a whole burnt offering. Do it at Mount Moriah, the mountain that I told you about.”

Abraham rose up in the morning and saddled his donkey. He took the two younger men with him (Eliezer and Ishmael), and he took his son, Isaac. He cut small wood, fig wood, and palm wood. These were used for burning the offering. He got up and went to the land of which Yahweh had told him. On the third day Abraham looked up and saw a cloud of great beauty simmering on top of the mountain. He understood what it was when he was still very far away.

Abraham said to his men, “You wait here with the donkey. I’ll go up there with the young man, to prove the ‘So your sons will be’ promise will happen. We will worship Yahweh of the world, and come back to you.”

Abraham took the wood of the offering and put it on his son Isaac. In his hand he took the fire and the knife; and they went together.

“I see the fire and the wood. But where is the lamb for the offering?” He asked.

Abraham said, “The Word of Yahweh will prepare for Himself a lamb for the offering. If He does not… then you are the offering.”

Both of them went with a humble heart, in unity.

Then they came to the place Yahweh had told him about. And Abraham rebuilt the altar that Adam had built. The same one that had been destroyed by the waters of the flood. The same one that Noah had rebuilt after it had been destroyed in the age of division. He stacked the wood neatly on it, tied up Isaac his son, and laid him on the altar on top of the wood. Abraham stretched out his hand, and took the knife to slay his son.

Isaac said to his father: “Bind my hands tight father, because in the hour of my distress I might tremble and confuse you. Then your offering will be profane. I’ll be cast into the pit of destruction in the world to come.”

In that moment the angels came down from on high, and said one to another, “Come, behold how these lonesome righteous ones who are in the world. This one slays, the other is going to be slain. The slayer won’t put it off. He who is going to be slain takes all the risk.”

Then The Angel of Yahweh called to him from the heavens. He said, “Abraham! Abraham!”

He said, “Don’t reach out to hurt the young man. Don’t do anything evil to him. Now I know that you fear Yahweh. You haven’t withheld your only son from Me.”

Abraham lifted up his eyes and saw a certain ram which had been created between the evenings of the foundation of the world. This ram was held in the entanglement of a tree by his horns. Abraham took him, and offered him as an offering instead of his son. And there Abraham gave thanks and prayed in The Name of The Word of Yahweh.

He said, “I pray through The Mercies that are before You Adonai. You are Yahweh who sees, and is not seen. I pray for mercy before You Adonai. You knew that it wasn’t at the bottom of my heart to turn away from doing this thing. The whole thing is known before You that there was no division in my heart. From the time that You commanded me to offer Isaac my son - to make him dust and ashes before You… But I arose in the morning and performed The Word with joy. I have fulfilled The Word. So now I pray for The Mercies from You, Adonai Elohim. When the children of Isaac are in their hour of need? You remember the binding of their father Isaac for them. Forgive and forget their sins. Deliver them out of all need. This will be their memory. You will hear them and deliver them. Their descendants will say: ‘In the mountain of the house of the sanctuary of Yahweh, Abraham offered his son Isaac. In this mountain of the house of the sanctuary the majesty of The Shekinah of Yahweh was revealed unto him.’”

Then the Angel of Yahweh called to Abraham a second time from the heavens, saying, “By My Word I’ve sworn,” said Yahweh,

“Since you’ve done this, and haven’t held back the only son you had, I will bless you. I will multiply your sons as the stars of the heavens. They will be like the sand which is on the seashore. Your sons will inherit the cities of their enemies. And all the peoples of the earth shall be blessed through the righteousness of your son, because you have obeyed My Word.”

So the angels on high took Isaac and brought him into the school of the great Shem. He was there for three years. The same day Abraham returned to his young men. They got and went together to The Well of the Seven. And Abraham lived at Beira-desheva. It was after Abraham had bound Isaac Satan came and told Sarah that Abraham had killed Isaac. And Sarah got up and cried out, and died from the agony of strangulation. But Abraham was resting along the road on his way home.

Abraham heard news on the way: “Milcha’s had sons for your brother Nachor. She’s been made pregnant because of the righteousness of her sister. The firstborn is Uts, then his brother Booz, then Kemuel (master of the Aramean magicians), Keshed, Chazo, Pildash, Jidlaph, Bethuel. And Bethuel has had Rebecca.”

These eight took Milcha to Nacor, the brother of Abraham. His concubine, Rëuma, also gave birth to Tebach, Gacham, Tachash, and Maacha.

==========
Thank you for your interest. Please find the whole work on Amaxon.com HERE